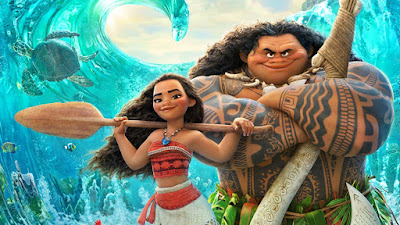 Mike S back with another installment of "The Animated Addict"!  This time, I discuss Disney's 2016 release, "Moana"- starring Auli'i Cravalho as Moana, and Dwayne "The Rock" Johnson as the demi-god Maui.

In the distant past, the demi-god Maui stole the heart of the Island Mother Te Fiti.  This unleashes a plague upon the Earth- one that slowly spreads and devours all life it comes in contact with.

Moana, the daughter of a Polynesian chief has felt the call of the ocean from a young age.  She soon discovers that the ocean itself has chosen her to return Te Fiti's heart- with the help of Maui.

"Moana" is a very enjoyable movie in my opinion.  While one could raise the argument about how Maui (an actual figure in Polynesian mythology) was reduced to a bit of a male stereotype, and that there are inaccuracies regarding the portrayal of the culture in the movie- as a story itself, it is one of the better Disney plot lines.  It has a strong female lead that is more proactive than you find in the standard Disney family films of the past.  There is a nice balance of humour, drama, and action.

I liked the characters as well.  Moana is a very strong, rounded person with strengths and vulnerabilities; hopes and doubts; dreams and fears.  And while Maui IS a bit of a male stereotype, he also has some depth to him that allows him to engage the audience's interest.  One of my favorite characters was Moana's grandmother.  There was a real sense of her strength, playfulness, wisdom, compassion, and serenity.  These qualities made her scenes all the better.

The voice acting was quite good as well.  The voices fit the characters, and helped to bring them to life on more than just a visual level.  The musical segments were well done, and added definition to the characters without feeling overly forced.  Though, I must be honest- I'm not entirely sure that Disney film NEED to always have musical numbers to be effective.

"Moana" is a family-friendly film that provides young girls a proactive and relatable role model.  I would certainly suggest people give it watch.  I'm putting it in "The Good".