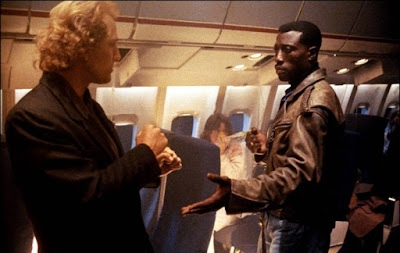 Ah, the early 90s. A time when Hollywood action movies were going through Die Hard Syndrome.

What is Die Hard Syndrome? Well, let me tell you! The Bruce Willis action flick was such a big hit that Hollywood producers, directors and actors were out to duplicate it in whatever way, shape or form they could think of. We had Die Hard on a Boat (Under Siege), Die Hard on a Bus (Speed) and, as is the case with Passenger 57, Die Hard on a Plane.

I loved the shit out of Passenger 57 when I first saw it in theatres in 1992. I even had the poster up on my bedroom wall. Revisiting it now, some 25 years later, I noticed things I didn't at the time. Like how much this flick suffers from Die Hard Syndrome.

There are musical cues that sound like the Die Hard score, Wesley Snipes and Bruce Payne (in full crazy bad-dude mode) have the same walkie-talkie conversations Bruce Willis and Alan Rickman did, and Snipes finds himself crawling through cramped spaces, albeit with a hot chick at his side.

Yup, this movie is definitely a product of its era.

But it's pretty entertaining as such. I've always enjoyed Snipes as an action hero. He's charismatic and a talented martial artist. Payne is just awesome as the villain, chewing scenery and killing innocents at random. Elizabeth Hurley turns up in an early role as a villainess, (spoiler alert) and is soooooooo damn hot! Plus there's Tom Sizemore, and he's always great.

The action scenes are serviceable, and I forgot how much of Passenger 57 was set on the ground. But that's fine. This is nothing more than a Friday night time waster. No more, no less. So it's best not to get too caught up in the intricacies of plot, filmmaking, acting etc. Is it a good way to spend 85 minutes or not?