Jason versus Beware the Slenderman 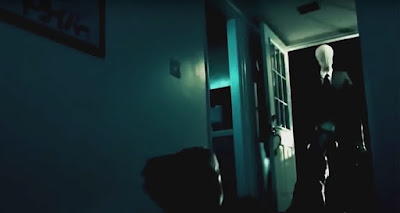 Beware the Slenderman is a doc I've wanted to watch since it was first announced a year and a half ago.

I'd become fascinated with this bit of Internet-created folklore, partly because of how pervasive Slenderman has become in our culture, and partly because my then four-year-old son and his friends talked abut him like I'd talked about the Boogeyman.

Then I remembered the crime at the heart of Irene Taylor Brodsky's film and, having spent a decade covering crime as a reporter, seeing Beware the Slenderman became a priority.

On May 31, 2014, two 12-year-old girls lured their best friend into the local Wisconsin woods and stabbed her 19 times, an attempted murder meant to appease the Slenderman, Anissa Weir and Morgan Geyser admitted to the crime and were tried in adult court. Their victim, Bella, survived. The film explores what lead up to the attack, and its aftermath, as wells the Slenderman mythos that was created on Creepypasta in 2009.

Taylor Brodsky's work is a fascinating piece of true crime, but it's real impact comes from how this is a nightmare for parents. The director presents no easy answers -- bad parenting, the Internet is evil, children are gullible -- because there are no such answers in life.

Childhood loneliness, and a need to belong, played a role in this crime, along with a topic few like to discuss: mental illness. These segments proved the most chilling to me, and hit like a left hook to the gut. Could this happen to my kid? I don't know what would be worse, be the parent of the victim, or of the perpetrators.

I don't think I'll see a better piece of cinema this year. It's a beautifully shot and compiled documentary that works on multiple emotional levels. It can be riveting and painful to watch, often at once, and pulls no punches. And in that comes its power.

Beware the Slenderman is something everyone -- especially parents -- should watch. It's a cautionary tale for our times, and a reminder of how scary, and lonely, it can be to be a kid.