Cops, orcs and fairies . . . oh my! The Bright trailer 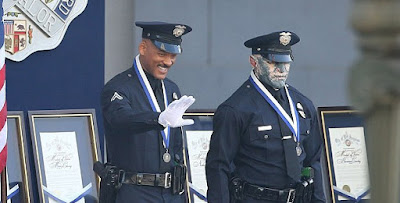 So, how about Alien Nation with orcs? End of Watch with fairies? That's pretty much what David Ayers new flick Bright looks like.

Only thing is, it looks better than I just made it sound.

Will Smith stars as a human cop who is paired with a new partner, an orc (played by Joel Edgerton), in an alternate world where humans and fantasy creatures co-exist. Of course, their personal differences must be set aside all buddy/cop style when things go really bad during patrol one night.

I'm gonna stop yammering now and just let y'all watch, as The Fresh Prince would said...

This looks like it's the biggest, most star-powered project Netflix has undertaken yet, and I like what I see. It's a David Ayer movie, only with mythical creatures. He kinda shat the bed with Suicide Squad, but I won't hold it against him. This is one I will stream when it hits Netflix Dec. 22.