About Marvel's The Defenders trailer 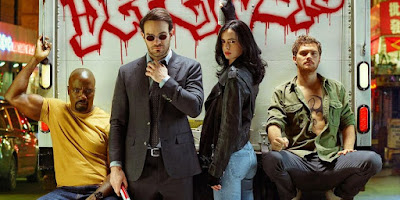 Much like The Avengers before it, it's been a long and purposeful road to The Defenders.

The execs at Marvel Studios have planned and plotted the upcoming Netflix series since long before Daredevil emerged on the scene two years ago, and followed it up with Jessica Jones, Luke Cage and Iron Fist.

You know, like Marvel did with Iron Man, Thor, Captain America etc and so on.

I loved the two seasons of Daredevil, but I never made it all the way through the subsequent series. I didn't even bother with Iron Fist because I don't know anyone who liked it. Shawn said it sucked, and that's enough for me.

Hand in my nerd card? Go fuck yourself, mouth breather. I'm bigger than you, and not in a I-live-in-my-mom's-basement-and-eat-waffles-out-of-a-big-bowl-of-syrup kinda way.

Superhero fatigue set in for me a long time ago, but the genre isn't going anywhere as long as the films continue to make big bucks, which they are, and the TV shows draw big ratings, which they must be as Iron Fist has been greenlit for a second season.

That being said, I've watched the Comic-Con trailer for The Defenders, and it looks pretty solid. Like The Avengers, it nicely brings all these street-level heroes together with the expected action and clashes of personality. We've got a month to wait before it comes out, and I, for one, will be tuning it.

And we've got a Punisher series to look forward to too. As I said on our Wonder Woman cast, I get way more excited for these vigilante heroes than I do the god-like ones, so I can watch shit like The Defenders and The Punisher all day long.