Why are movies boring? 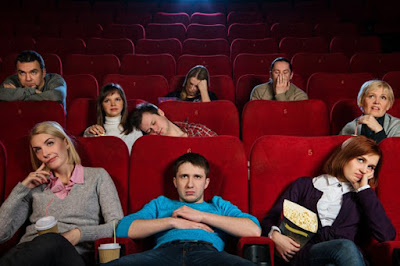 Think of this as a companion to my What's wrong with Hollywood? piece. But, for the most part, I find myself bored with movies.

Now, take into consideration that by movies, I mean new to newer movies. And yes, there are exceptions to this statement, which I admit is a bit generalized.

I have noticed, though, the list of movies I want to catch in a theatre grows smaller with each passing year, likely because everything is a reboot or remake. And movie news, which I used to be glued to on a daily basis, is now something I catch up on Saturday mornings and not feel like I've missed anything.

There's little out there, or on the docket, that's of interest or, once watched, lends itself to repeated viewing. I watch it and, even if I dig it, I'm done.

And yes, Star Wars: The Force Awakens hits me just as hard as it did upon first viewing it last December. So good!

Most mainstream entertainment is boring me. Books and music are an increasingly barren wasteland of quality, in my opinion. The one shining light is TV which, thanks to Netflix and providers like HBO and AMC, gives feature films a run for their money.

I think the time has come to broaden my entertainment horizons. Maybe the genres I've relied on to entertain me have grown stagnant, and it's time to give other kinds of movies a try?

Well, not romcoms. Even my wife hates those!

We'll see what happens.  In the meantime, what are your thoughts, Basementites? Are movies, especially genre movies, losing their edge?