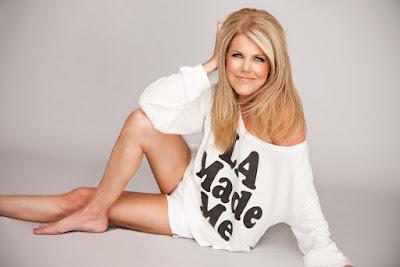 Model, actress and all-around class act, Jason, Shawn and Amy are excited to welcome the beautiful and talented Tracey Birdsall to The Basement tonight.

Tracey got her start in commercials, most specifically a series of Sunkist soda ads. And she's gone on to a lucrative modelling career that's had her appear on Macy's billboard ads in New York City and countless magazine covers.

When it comes to acting, she appeared on afternoon soap operas and such TV shows as Family Ties and Hearts Are Wild before heading to the big screen in movies like Casino.

Never one to sit idle, Tracey has four movies scheduled for release this year, including Who's Jenna...? and Rogue Warrior: Robot Fighter. She discusses both with the Terrible Trio tonight, and offers advice on how to be a hard-working actor in Hollywood. Trust us when we say to you there is a never a dull moment during this great, and candid, conversation.

But that's not all as Neil Johnson, the director of Rogue Warrior: Robot Fighter, drops in to discuss how Video On Demand, Netflix and streaming is affecting movie distribution, and how it impacts filmmakers. Many movie fans will likely be surprised by what Neil, who has made dozens of films, has to say.

This is one of the finest hours in Basement history! And we've got music from Bad Man Incorporated, Mattashi and Twilight Necross to pleasure your ear holes! How do you hear it? By tuning in at 11 p.m. PST at 92.5 FM CFBX Kamloops or online at www.thex.ca!

A podcast version will be available on Sunday. Stick with us!