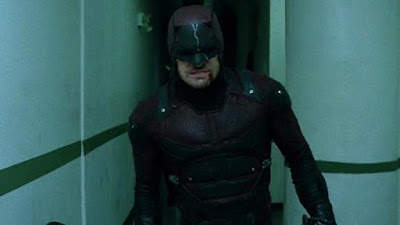 I don't binge TV. It's not that I don't find shows I enjoy, but I just don't have the time. However, in the case of Daredevil Season Two, I couldn't help myself. The end of each episode compelled me to continue to the next, moving from one to the other like one of The Punisher's bullets hitting its target.

There's not much I can add to my thoughts on this season that I didn't write about in my review of the first six episodes, but that doesn't reflect the quality of the season's second half. Not by a long shot.

Simply put, this season is the best comic-book anything, ever. Marvel and Netflix did, on a limited budget and a TV streaming service, what DC and Warner Bros. could only dream about with Batman V Superman: Dawn of Justice -- they created the perfect comic-book adaptation, one that's loyal to the source material and characters. And is never, ever dull.

Two things set the second half of the season apart from the first, the inclusion of The Hand -- which I waited three decades to see realized on screen -- and the return of Wilson Fisk. Both are handled extremely well, and set up events for future seasons. THIS, ladies and gentlemen, is how you build future stories and mythology.

Action? There's still a lot of it, and it's some of the best, most bone crunching -- and bloody -- ever put on screen. I like how the show runners didn't hold back. You can't with characters like The Punisher and Elektra, or a clan of mystical ninjas like The Hand. This is R-rated stuff, and I wouldn't have it any other way.

And yes, the first time The Punisher wears his trademark skull I got goosebumps. Give Jon Bernthal his own series already!

The stage is set for a great third season. Will we see Frank Miller's Born Again realized? I certainly hope so. What I can guarantee you is I'll be sticking with this show as long as Marvel and Netflix keep making it.

Took Jason long enough to finish...haha. I can't understand how anyone could stop in the middle of this season.  This is the best thing I've watched on screen, easily, for a couple of years. Easily.

It fits everything the basement believes in.  Everything. Great story, well told, violent, swearing and man.  Don't hold back.  SHOW US! as we always say. And...it did.  Showed us everything.  Nicely done.

I wasn't even a Daredevil fan..until this series.  I was all about Superman.  Punisher?  I would say, the best screen adaptation I've ever seen. Good god, bring on season 3.