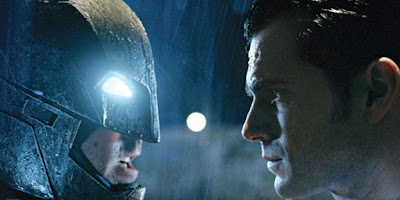 Batman V Superman: Dawn of Justice is supposed to launch an entire DC movie universe. Given the divisiveness of how this would-be blockbuster is being received, there's a chance Warner Bros.'s plan could be jeopardy. Probably not, but a chance.

Opinions are subjective though, and one person's hatred is another fan's gem. I wasn't pumped heading into Batman V Superman: Dawn of Justice, but I wanted to like it. I'm a Batman fan, enjoyed Man of Steel, and am all about seeing classic characters brought to life on the big screen.

Thing is, Marvel has already done what DC and Warner Bros. are trying to do. So, has the WB and DC pulled it off, in this Basement Dweller's opinion? Stick with me!

Batman V Superman is the worst kind of offender -- it's a long, boring, joyless movie with not enough payoff to justify the lengthy set up. There are good moments, and everyone tried very hard to make an epic movie, but there's too much talk, too little action, and the much touted fight between the heroes over too quickly.

Yup, for a movie called Batman V Superman, there's very little in the way of a fight between Batman and Superman. The duo duke it out for five minutes, then team up with Wonder Woman to fight the real threat. Spoiler alert.

Batffleck is quite good, but does nothing to erase the memory of Christian Bale's Dark Knight films. Gal Gadot's Wonder Woman is gorgeous. Can't wait to see how her movie turns out. Henry Cavill's Superman? He's fine. He was good in Man of Steel, and he continues to own the character here.

The Marvel Cinematic Universe has nothing to fear. They did it first and, even if Suicide Squad is good, I'm already convinced they've done it better. DC and Warner Bros. bet way too much on one movie, and didn't pull it off.