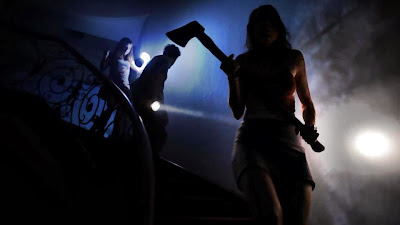 The end is nigh . . . for 2013 that is. But Jason and Shawn still have one more podcast to share before the new year is ushered through the door.

And what better way to shrug off a turkey coma and ease that holiday hangover than a couple of horror movies?

First up is Saturday Morning Massacre, a dark and bloody parody about a Scooby-Doo-like team of paranormal investigators and their devoted dog. Dark. Bloody. Scooby-Doo? I says pardon!?! What do Jason and Shawn have to say about this one? Stick with us!

Plus, Jason and Shawn share their Top 5 seasonal movies, some music for your ear holes, and the latest movie news. And, if you're lucky, Shawn will dazzle you with his Kermit the Frog impression. If you're lucky.

Find out when the latest episode of Film Reviews from the Basement lands in the a.m. Until then, check out these previews.