Jason versus Poltergeist II: The Other Side 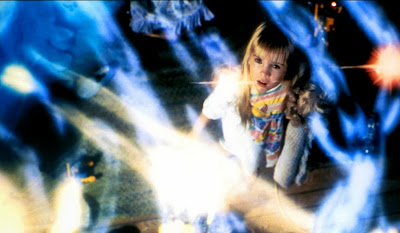 When I reviewed 2 Guns, the evening's entertainment was actually a toss up between the new Denzel Washington flick and a favourite from my youth. I went with Denzel, but shoulda gone with Poltergeist II: The Other Side.

Fortunately -- or unfortunately, as the case may be -- I was one-two punched by a Big Bad Bug and the opportunity presented itself.

The Freeling family have a new house, but their troubles with supernatural forces don't seem to be over.

Poltergeist II is no Poltergeist, but there's no way a sequel to one of the best horror movies of all time could be as good. Thankfully, screenwriters Michael Grais and Mark Victor opted to continue the Freeling's story and not regurgitate the first flick. This is a tried and true sequel, and the film is better for it.

What also works in Poltergeist II's favour is a very likable family well played by a likable cast. Everyone is as good here as they were in Poltergeist. And the sense of humour is back again, which is much appreciate.

But the flick isn't scary enough and the ending, which takes the Freelings to the other side, is nothing short of laughable.