Jason versus The Lone Ranger 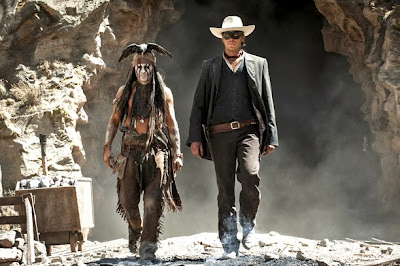 Native American warrior Tonto recounts the untold tales that transformed John Reid, a man of the law, into a legend of justice.

This movie isn't as bad as everyone made it out to be, but it is an overblown wannabe epic when it should have been a simple western tale of justice and revenge. The Lone Ranger isn't the kind of story you turn into a big budget Hollywood blockbuster. It's a straight-ahead tale of a masked man, his trusted sidekick Tonto and the evil Butch Cavendish.

All of those elements are here, and the movie does have a solid first hour and a decent last act, but the rest is a bloated mess of shifting tones, silly asides and needless characters. Plus there's an unnecessary wrap-around story that adds nothing to the film.

I liked Hammer as The Lone Ranger, although he doesn't get to cut loose as the hero until the final 30 minutes, and dug Depp as Tonto. And there's a great sequence involving The William Tell Overture -- The Lone Ranger's theme -- that would have made dad proud.

Too bad the rest of the movie isn't as good. As it is, it's a Bad, although I'd sit down and give it a watch if it happened to be on at someone's house.