December 27, 2013
The first Insidious was a surprise hit that delighted mainstream audiences and polarized horror fans. Some in The Basement dug it, others were left with mixed emotions. I'm one of the ones who dug it. How does Insidious Chapter 2 stand up? Stick with me! 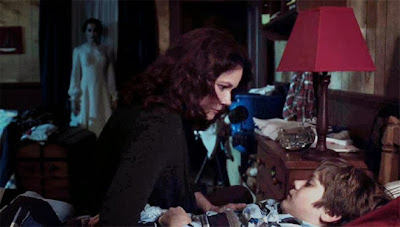 The haunted Lambert family seeks to uncover the mysterious childhood secret that has left them dangerously connected to the spirit world.

Whatever you felt about James Wan and Leigh Whannell's Insidious will likely stand with this second film. If you dug the scares, quirky humour and dark journey into The Further, then you'll feel the same about Insidious Chapter 2. If you didn't like what they were slinging then, you probably won't now.

As far as I'm concerned, this is a solid sequel that does everything right, improving on the first by fleshing out the back story and continuing the tale of the Lambert family in much the same way that Poltergeist II: The Other Side did with Poltergeist. But I'd say Insidious Chapter 2 does a better job.

How so? It's scary, the quirky humour is toned down, and Wan and Whannell bring a human menace into the fray. Plus a couple of plot threads play out simultaneously, so there's not one dull moment.

Most importantly, I like the characters. All of them. Even Specs and Tucker. And Rose Byrne is always easy on the eyes.

This is a Good. No, it's not The Conjuring, but Wan is the best horror director working today. Bar none.