December 21, 2013
Writer/director Neil Blomkamp exploded out of nowhere with the brilliant District 9, crafting a thoughtful and exciting sci-fi/action flick with a moral conscience. How does his follow-up effort rate? Stick with me! 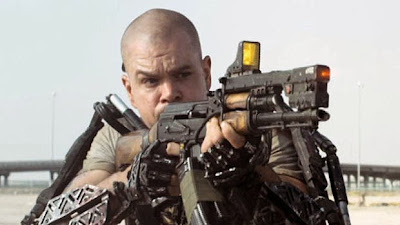 In the year 2154, the very wealthy live on a man-made space station while the rest of the population resides on a ruined Earth. A man takes on a mission that could bring equality to the polarized worlds.

No, Elysium isn't as good as District 9. Not by a long shot. It's not as thoughtful, clever or exciting. And the sum total of exploding bodies is considerably less. Sad critic is sad.

But I still enjoyed Elysium as it was. Blomkamp certainly has something to say about the haves and the have nots, and I dug what he was slinging. What action there is is awesome, especially a couple of throwdowns between Matt Damon and Sharlto Copley and Copley's henchmen.

I dug the cast too. Damon is born to play roles like this. I wish he tackled more action films. Copley is always brilliant and, although I'm not a fan of Alice Braga, I thought she was decent here. Oh yeah, Jodie Foster is in this too, but she's underutilized.

Decent is about the best way to sum of Elysium. It doesn't have the re-watchability of District 9, but it's certainly worth a visit. And I think Blomkamp is talent to watch. A Bad from me.