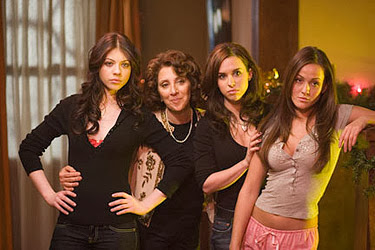 We piss and moan a lot about remakes in The Basement. Most being unimaginative trash deserve the blacklash, but a chosen few rise about the realm of cheap retread and become something more. Does this modern spin on the Bob Clark seasonal classic do just that? Stick with me!

An escaped maniac returns to his childhood home on Christmas Eve, which is now a sorority house, and begins to murder the sorority sisters one by one. Ish.

First off, this flick has more hot chicks per frame than most horror movies. It's a gloriously distracting problem to have, and one more flicks need to embrace. Good for you, writer/director Glen Morgan!

Secondly, Black Christmas (2006) brings a lot of new elements to the table. It provides a compelling backstory to killer Billy Lenz and ups the carnage factor by the power of 10. This is a disturbing, R-rated horror flick with plenty and blood, thunder, and boobs. Respect!

Is this Black Christmas as classy as the 1974 original? No. Not by a long shot. But it's a fun and guilty pleasure when taken on its own terms. Besides, how can a tried and true Basementite not love a movie that puts Mary Elizabeth Winstead, Katie Cassidy, Michelle Trachtenberg, Lacey Chabert and Crystal Lowe together in one room?

I might hate myself in the morning, but I had a blast with the Black Christmas remake. It's a Good, whether I like it or not.