The Basement and The Art of the Steal 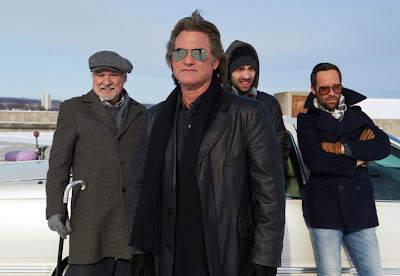 We told you about Kurt Russell's latest movie, The Art of the Steal, earlier in the fall when the flick was about to get a limited release in Canadian theatres. Chance are few Basementites got the chance to see the heist/comedy, but rest easy -- the film is set for a U.S. run early next year followed by a trip through the video on demand circuit.

To celebrate, Shawn and I sat down with The Art of the Steal's producer, Nicholas Tabarrok, to talk about the movie, its legendary star and his strong supporting cast -- which includes Matt Dillon, Jay Baruchel, Katheryn Winnick and the original Zod himself, Terence Stamp -- and what it takes to make it in indie film.

Cool, yes? Trust me, it's all in the reflexes.

To say Shawn and I are pumped would be an understatement. Nicholas is a cool guy who shares The Basement's sensibilities about what makes cinema great. The interview is highly entertaining and informative.

You'll hear it on our Friday, Dec. 13, episode along with reviews of the indie film Exit 727 and the found-footage horror flick Skinwalker Ranch.