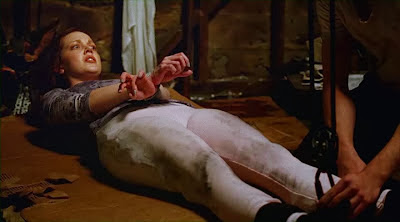 Donner what, you ask? That's right, a movie came out that was so under the radar it even snuck by Shawn and I about a season or so ago. But I caught up with it, oh boy did I.

Donner Pass has a well-known and macabre history -- the place where George Donner and his party got stuck in the winter of 1846 and were forced to resort to cannibalism to keep from starving. But what if it wasn't just history?

Cool concept, yes!?! Sure, but don't be fooled. Donner Pass is little more than just another low-budget slasher movie with asshole teens, boobies and bloodshed. So what the problem is?

Well, nothing really. Donner Pass is well made and acted, and has the look of many of the 80s slasher flicks it's paying homage to, only with a slightly more interesting -- and true, according to legend -- back story.

But we don't see enough of the kills (show us, dammit!) and I figured out the twist ending about 20 minutes in. And I've seen better. Much better.

So I'm giving Donner Pass a Bad, but letting fans know it's worth the watch once if you're a slasher completist.