Jason and Shawn versus Ghost Team One and Standards of Living


Jason: It's about fucking time someone made a found-footage horror movie spoof. I'm actually surprised it took this long given how the subgenre has taken over the mainstream. And, as far as spoofs go, this isn't bad. Yes, there are some funny parts, but not enough to carry the entire movie. Sure, there were even a couple of shorts shitting moments AND someone's head explodes, but still. A comedy needs to be funny from start to finish and a horror film needs to be scary and/or gory straight through. This was neither. I liked Ghost Team One enough to more or less enjoy the watch, but I won't be watching it again. A Bad.

Shawn: I was really hoping to save this review for last, as starting with the crescendo seems funny. Obviously I hate found footage, or whatever...and I say that EVERY TIME I see one of these, where their "film school friend" is filming, neigh, "documenting", everything. Which is the case here. That said, I was super pleasantly surprised. This was smart, funny and well acted. I enjoyed every part of this and while my "standards" for "smart" are quite low, that makes me enjoy simplicity that much more. Like giving a retard a crayon...you know? So much pleasure, so simple. Anyways. I gotta give this a Good. 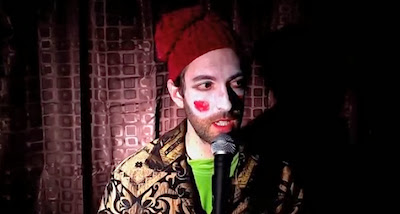 
Jason: First movie shot on an iPad2 eh. Not bad. Not bad at all. Granted, it does look like a home movie, but for something filmed on a tablet, I expected worse. Fortunately writer/director Aaron Mento crafted a decent script hung on one way cool concept -- inter-dimensional travel. This is an awesome Twilight Zone episode dragged out into a 90-minute feature. I'm glad I watched a screener, because I wouldn't have paid $10 or worse, three extra dollars, to see this. It's too short on action and too heavy on talk to warrant a watch at the theatre. I dug all the acting in this -- it actually saved the movie -- and was intrigued by the premise. We've watched a lot of first films in The Basement, and a slew of ultra low budget stuff, and this was certainly one of the better. It's a Bad, but worth the watch for the curious.

Shawn: Shot on the IPAD. What the hell to expect here? I was really hoping their IPAD caught on fire after that opening, "monologue" or whatever the hell it was. But it didn't. They shot the simplist film ever known to man (read previous review about simplicity) in some dude's house, with like, zero props...did I mention, on their IPAD? But this wasn't just a bunch of bored kids saying "Lets make a goofy movie". For some reason they managed to grab my attention and hold it through the running length of the flick and to be honest, I had a decent time. I doubt I would watch it again, but for what it was, I was OK with one watch and gonna give it a Bad. Man, are my "standards" that low? haha....(see what I did there?) haha.