Jason and Shawn versus Bounty Killer and I Declare War 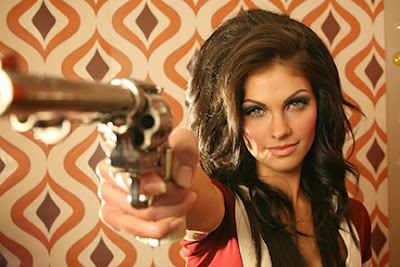 
Jason: I am madly in lust with Mary Death, AKA Christian Pitre. She's one bad ass chick and looks dead sexy in every shot she's in. And although exceptionally hot, I still believed she could kick all that ass. Kudos to her. Bounty Killer does overstay it's welcome a bit. And Gary Busey is underused, although he was probably drunk and/or high for most of the filming. But I'd still watch this again. There's been few movies in the last year that have been as violent, bloody, funny and sexy as this. Which is to say I was highly entertained by this flick. It's a Good.

Shawn: Now here is a movie that is geared for adults in every way, shape and form. Did I dig this post apocalyptic business killing dreamland? You betcha, I had a great time....for one watch. I'll give it a Bad, but it was much closer to a Good than some. It dragged on a tad too long, tried to tie in too much story in a movie that was mostly straight forward. I wouldn't seek it out to watch again, but if I walked in a room while someone was watching it, I'd watch it too! 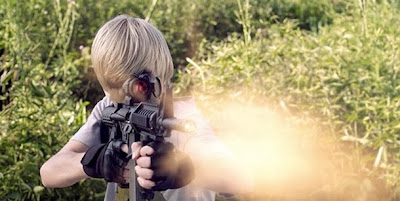 
Jason: I Declare War perfectly captures the drama, double crosses, bitter rivalries, and over-active imaginations that all boys -- at least the ones that I knew -- had playing war. Hell, to this day I blow people up with my mind or laser vision. The best part of this movie was seeing the war game through the kids' eyes. Sure, they were carrying toys and sticks and had to make “pow pow” sounds. But we saw it as they saw it, real guns firing real bullets. Real grenades that really exploded. None of this paint BS. While some sensitive types might cringe at this portrayal, I loved it. I will watch this again. Hell, I intend to own it. And anyone that enjoys a good damn movie should watch it. 'Cause it's Good!

Shawn: Interesting concept. But BIIIIIIGEST gripe with this movie is who the flaming fuck is the target audience supposed to be, hmmmm???!?!!? As a parent, I don't care to see a bunch of 11 year olds running around the woods swearing and torturing each other. War is fine, but what was with the "realism" of the imagination taking over. I mean, cool that you did that, if the target audience was kids. But the profanity and levels of racism etc is for the adults, but then you left out the gory part, as if it were for kids. Points for originality, but not enough for a Good. Bad. I spent the bulk of the movie not understanding why it was made. And the lead kid needed a good smack. Period.