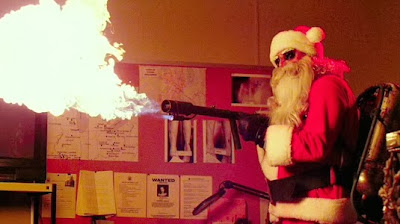 Last year at about this time Shawn and I were introduced to the work of director Steven C. Miller. And what an introduction it was!

Silent Night, Steven's loose remake of Silent Night, Deadly Night, is a lean, mean slasher machine that did what all good remakes should -- it took the idea of a killer Santa Claus and ran with it. And boy did it run far. Silent Night will get regular seasonal play alongside the classic Black Christmas.

We didn't catch Silent Night in theatres during its original run. However, lucky Basementites south of the border -- that means you, U.S.A. -- get another chance as the flick begins screening in theatres on Dec. 18. Exact theatres and dates are still being sorted out, but Sacramento, Buffalo and New Orleans are on the list.

For the uninitiated, the police force of a remote Midwestern town search for a killer Santa Claus who is picking off citizens on Christmas Eve. It's up to Jaime King and Malcolm McDowell to stop him.

If you haven't seen this great flick, we strongly suggested you take advantage of the opportunity!

Source: Shock Til You Drop