The Month of Horror Day 12: The Loved Ones

October 12, 2013
Basement contributor Matt Bellamy has taken it upon himself to watch and review at least one horror movie a day for the month of October . . . because he's awesome that way! Today, Bellamy learns young love isn't all it's cracked up to be. 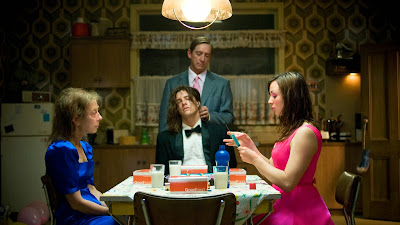 Wow, where to begin on one of the most messed up horror movies I've seen in quite some time? Let's see, if you've ever watched 'Pretty In Pink' or 'Sixteen Candles' and thought to yourself "Hmm, you know, this could really benefit from some blood, gore, and torture" then this is the flick for you! I understand this was one of the biggest horror releases ever in Australia and was quite a hit down under although it didn't make much of a splash in North America but you can watch it now on Netflix, as I did!

The story revolves around Lola who asks Brent to prom but he's already going with his girlfriend so he politely turns her down. Heart-breaking stuff for a wallflower but just like Molly Ringwald in those 80's John Hughes classics, Lola won't give up there! Along with her creepy father who looks like an Aussie version of Harry Dean Stanton ('Pretty In Pink' connection!) they kidnap the teen-angsty Brent and imprison him out at their farm for a night of dancing, punch, cake, and power drills to the forehead. Oh, there's also a bunch of cannibals living in the cellar as well because of course there is.

I liked 'The Loved Ones'. I wasn't crazy about it but I found it fairly original and enjoyable for what it was. There were a few missed opportunities that could have really put it over the top, such as cheesy high school dance songs that would have contrasted to the brutality of the torture scenes, a la 'Reservoir Dogs' but oh well, music licensing can be costly for a film with a small budget. The ending is also abrupt so that wasn't particularly strong but at a tight 85-minutes this movie really flies by and doesn't have any down time or fat on it so those are major bonuses.