Shawn VS White House Down 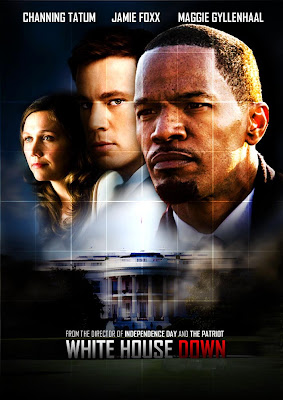 I'm not sure why, but I watched this movie with resistance. Even though my favorite director, Roland Emmerich, was involved.

Maybe because Channing Tatum does not seem like the "action" hero I need to see. Mostly because I'm positive I could kick his ass and he'd still get the chicks. (only because I'm married and would allow it)...but moving on.

He's a decent actor, this was a decent cast and Roland Emmerich's hate on for all things American was apparent. I like that.

I was pleasantly surprised by this movie. Maybe because I like seeing congress blow up as much as Emmerich likes to blow it up. haha.

Good chemistry, OK characters, pretty decent story. Had a couple of plot poos or awkward bits, but overall I enjoyed the ride.  It was mindless and stuff blowed up.  Yes, "blowed" up.

I might have thought that this could be the only movie directed by Roland Emmerich that I could only watch once. But, I'm pretty sure I'll watch it again, maybe with the wife. I'll probably dig it then, too.

So Good for this one.