Jason versus This Is the End 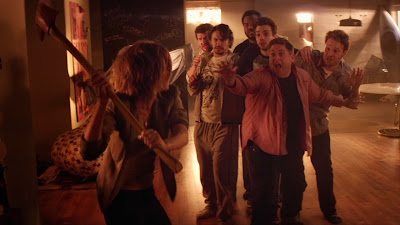 Having a bummer of a day? Things not going your way? Then grab a few drinks and push play on this mofo, motherfucker, and enjoy. Boo-yah!

While attending a party at James Franco's house, Seth Rogen, Jay Baruchel and many other celebrities are faced with the apocalypse.

OK, this is not to everyone's taste. But for those who like their humour self aware, offensive, and a tad vulgar, it's the cat's ass. This is a funny as fuck end-of-the-world comedy that pokes fun at celebrity, religion, and the end of days, often at the same time. It helps to be a fan of Rogen, Baruchel and Evan Goldberg's sense of humour, but isn't mandatory.

I dug the numerous guest spots by the likes to Michael Cera, Emma Watson, Christopher Mintz-Plasse and many others. And who doesn't want to see Aziz Ansari kicked into a hole to hell? I laughed, a lot. The first 10 minutes are gold, the rest works more often than not.

This Is the End is a perfect way to let off some steam at the end of the day. And it's funny enough to warrant repeat viewings. Funny is funny, and this one is a Good.

PS: I hate James Franco. Seeing him eaten by Danny McBride made my night. Spoiler alert.