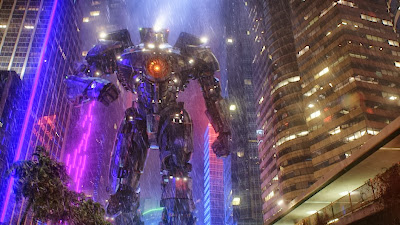 What boy of the nerd variety didn't dream of that glorious day when giant robots would throw down with giant monsters? For the longest time we were content to watch said combat unfold in low budget Japanese movies and kiddie cartoons. Then along comes director Guillermo del Toro and the game changes.

As a war between humankind and monstrous sea creatures wages on, a former pilot and a trainee are paired up to drive a seemingly obsolete special weapon in a desperate effort to save the world from the apocalypse.

OK, Pacific Rim is far from perfect. The first half focuses way too much on the puny humans and Top Gun rivalries. And lets' face it, we know we're watching nothing but a bunch of special effects when it comes to the smashing. This makes it hard, at least for yours truly, to get too wrapped up in the action.

These quibbles aside, Pacific Rim is the cat's ass. This movie is fun. And it fulfilled my childhood dream of watching monsters versus robots played out in a convincing fashion. This isn't Shakespeare, but I don't want it to be. I asked for robots versus monsters and del Toro delivered. 'Nuff said.

Literally, 'nuff said. I had a blast with Pacific Rim and I'll watch it again. I'm surprised this wasn't a bigger hit, as it's just . . . awesome. Del Toro and company deliver on what they promised, and that's enough to easily overlook what faults this fun flick has. A Good.