Jason and Shawn versus Curse of Chucky and Europa Report 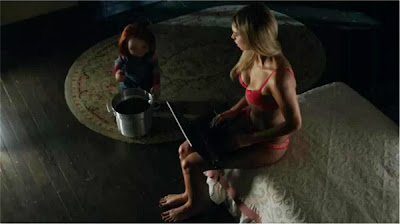 
Jason: This is to the Child's Play franchise what H20 was to the Halloween franchise; a return to form for a series that lost its roots with too many sequels. I like that this flick went dark. Gone is most of the satirical and campy humour, although all the previous films are nicely acknowledged at one point or another. When you go back and watch the original Child's Play, it was a serious horror movie. It took a silly idea about a killer doll and made it work. This flick, which is written and directed by Child's Play creator Don Mancini, goes the same route. I thank him for that. There's some good kills -- including a brilliant decapitation and beautiful axe to the face -- and even a jump scare or three. Child's Play isn't my favourite horror franchise, but I respect that the filmmakers took this flick where it needed to go. That said, I'm not fan enough of the series to watch it more than once, so it rates a Bad

Shawn: Oh man, the 80’s were great for cheese like this. Satanic doll, “dooey dembella”…or some shit.
I liked Child’s Play. 1988 is when the first one came out. But they just got incredibly laughable after that. Still, were neat for a watch, but never a second time. Haha. That was 25 years ago. What has changed? Well, we don’t use stop motion anymore, but that doesn’t really help…Haha. This movie looked wicked. The shot filters, the locations, the feel….it felt like it could be a siiiiick horror movie. It had BUTTT loads of potential and OK gore. I also liked the back story and the way they tied it together. However, this still falls into the realm of a laughable sequel. More so, since 25 years later, I might have been expecting more from a Chucky movie. It was definitely worth the watch, if you are a Child's Play completest… but are there any out there? I could only stand the watch once…but think the actors, sets and stuff should be used for something different, cause that shit was dope. Bad. 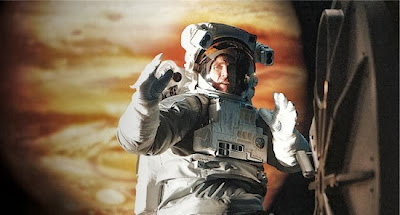 
Jason: First off, and call me a selfish coward, I'm never travelling into space. Nor am I going to sacrifice time with my wife and son to better mankind through exploring strange new worlds and new civilizations. That's just gay. And stupid. It's stupid and gay. Europa Report turned me off space travel completely. It shows just how dangerous -- and boring -- it is. Europa Report does have a few decent moments. The final 10 minutes are solid and intense as is a spacewalk involving the great Sharlto Copley that ends very badly for Sharlto Copley. Spoiler alert. And the filmmakers do a good job of realizing life during space travel. But I didn't really like any of the characters, other than Sharlto Copley, and that's because he played a parent, and found the film as a whole rather slow moving and uninteresting. I get that they were trying to be realistic, and good on 'em. But that didn't make for a particularly thrilling movie. Too bad too as the potential is there for a really solid flick. As is, it's Bad for me

Shawn: Europa (Jupiters’ moon) is the next frontier in the search for life. This sciency space shit peaks my interest. And it has Sharlto Copley in it. He is getting some sick work these days and deservedly so. He is every bit as good an actor as Christoph Waltz. This movie was very well made and very pretty to look at. It was found footage, but not because there is no budget…That makes a huge difference in this style of film. Trust me. I found the movie moved a little slow and then was let down by the “reveal”. I do, however, think that a sequel should be made…that could be some siiiiiiiiiiiiick story, war, whatever. If any movie ever NEEDED a sequel, this was the set up movie of all time. But alas, it isn’t worth a second watch, so I give it a Bad.