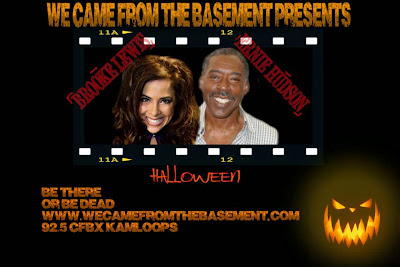 There are many Halloween traditions . . . never take candy from a stranger, don't blow out a jack-o'-lantern before midnight, and The Basement's Halloween Spooktacular.

And this Halloween Spooktacular is the mother of all Halloween Spooktaculars. Joining Jason and Shawn for the entire hour is none other than award winning scream queen Brooke Lewis! Brooke and the Basement Boys discuss all things horror, including the creepiest movie music/sounds that accompany the genre.

Then, nothing says Halloween like ghosts. And nothing says ghosts like Ghostbusters. Which is why Jason and Shawn are proud to feature an exclusive interview with Ghostbuster Winston Zeddemore himself -- Ernie Hudson.

Hudson talks about his classic role, working with Bill Murray and Dan Akroyd, and the possibility of a third Ghostbusters movie. But that's not all! The man chats his career, his friendship with the late Brandon Lee, and the state of the film industry. THIS is the one movie, horror and Basement fans need to hear.

So prepare yourselves, Basementities, the Halloween Spooktacular 5 premieres Halloween morning. Nothing says Halloween like an episode . . . from the basement!