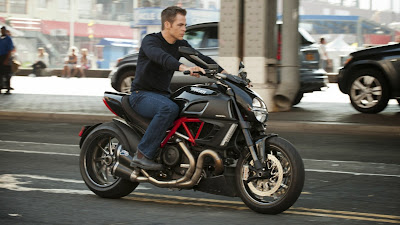 Just because I'm not a particularly big Tom Clancy fan -- may he rest in piece by the way -- doesn't mean there aren't millions of people who are. So many so that several of his bestsellers have been made into blockbuster movies.

His No. 1 creation is arguably C.I.A. "analyst" Jack Ryan, who first appeared in The Hunt for Red October and went on to be featured in more than a half dozen books and four feature films. The character has been portrayed by none other than Alec Baldwin, Harrison Ford and Ben Affleck, soon to be known as Batffleck.

Paramount has dusted Ryan off again, and recruited James T. Kirk himself -- Chris Pine -- to play him in a reboot along the lines of the one James Bond went through with Casino Royale. The end result can be witnessed in the trailer below.

Truth is, I like it. Sure, there's a taste of Bourne and Bond, but a lot of the elements present in Ryan's previous film appearances are there. This is an espionage flick with action beats, and it looks like director Kenneth Brannagh -- who also plays the baddie -- nails it.