Fangoria heads into The Shelter 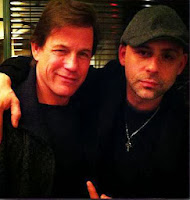 By now The Shelter should be a film Basementites are well versed in. It's written and directed by our bro John Fallon, AKA The Arrow of Arrow in the Head, and stars veteran actor Michael Pare, AKA Eddie of Eddie and the Cruisers, among many other roles.

The flick's crowd sourcing campaign is coming to an end. If you haven't already, I strongly suggest heading to Indiegogo and throwing a few bucks The Shelter's way.

Never ones to be left out, horror magazine Fangoria sat down with John to talk about The Shelter and why The Arrow went with Pare as his leading man. Here's an excerpt:

"For this personal journey, Fallon had to seek out a genre stalwart to bring the weight his eerie vision demanded, and ended up casting none other than Michael Pare for the lead in his terrifying tale. Pare, no stranger to dark material, may be venturing into a new realm of fright film with THE SHELTER, but Fallon holds no doubts to the actor’s ability to adapt and excel.

'The lead character of Thomas, which Pare will play, is pretty much in every frame of the picture. So I needed an actor with the charisma and gravitas to be able to keep the viewers riveted to him,” claims Fallon. “In my opinion, Mike has that ‘special something’ that makes you want to look at him onscreen. I actually watched ROAD TO HELL after I cast him and it confirmed that I had made the right choice. He can communicate so much via one movement or a look. He’s an ace at playing to the camera and THE SHELTER needs that as, for the most part, dialogue is minimal',"

Wanna check out the whole thing? Then drop by Fangoria and give the article a read. It's good stuff.

Also, because we can, here's a video tour of The Shelter's main location. Just so y'all can get a taste of where the action goes down. For more on the film, visit the Facebook page.