Curse of Chucky and Europa Report 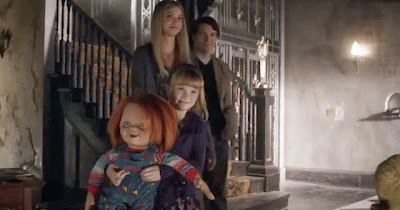 Podcast focused, the show still has a home on 92.5FM CFBX Kamloops' late-night schedule. A shorter season with an episode every two weeks, Jason and Shawn still bring you the best that Basement cinema has to offer.

And what better way to start than with Curse of Chucky, a 2013 direct-to-home sixth sequel to 80s classic Child's Play. Chucky the doll is back to wreak havoc on an unsuspecting family, with expected results. Does this dark tale of a killer doll still have bite? Stick with us!

Then it's off to outer space with the found (spits) footage flick Europa Report starring District 9's Shartlo Copley. The story? An international crew of astronauts undertakes a privately funded mission to search for life on Jupiter's fourth largest moon. What do they find? Tune in when the podcast lands in the a.m.

So prepare yourselves for a dozen or so podcasts as only The Basement can present them, with musical interludes, groovy features and movie-related news and interviews. It'll be more fun than a trip to the dentist, we promise you that.

And now for a preview of coming attractions: