A lot going on in The Days God Slept 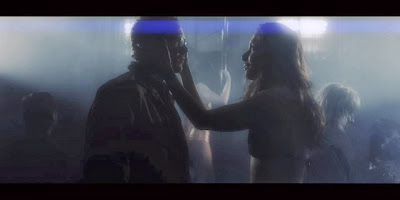 Talented up-and-coming director Jeremiah Kipp sent another one of his short flicks The Basement's way. Would someone give this cat a feature film already?

Decidedly different than Baggage, The Days God Slept is an experimental film filled with beautiful imagery and a wonderful score by THE Harry Manfredini. That's right, the same Harry Manfredini who scored Friday the 13th and was interviewed on our show.

The Days God Slept is best described as a cinematic prayer that deals with love and secrets; faith and acceptance. The story, near as I can tell -- I can be thick, I tells yah -- is Kristy has a secret to tell John. When she does, will their burgeoning ties of affection be strengthened or severed? Or will they find that the hardest thing to accept might be oneself?

Given that most of the flick takes place in a strip club, The Days God Slept is filled with sex and boobies, which we're all for here in The Basement. While this sounds exploitative, it's not. We're dealing in metaphors and an exploration of love, relationships and faith in those we care about.

This is a good flick along the lines of Kipp's Crestfallen. It's not for everyone, but it's well put together. Would I watch it again? Probably not, so it rates a Bad in our books. But it's still good.

Scope out the trailer here: