A wee something for our tween readers 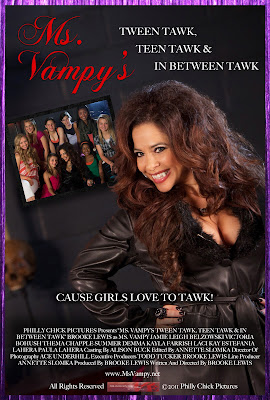 Ask any horror fan when they got into the genre and the answer will take them back to when they were kids. As kids, we had a love/hate relationship with fear. We hated being scared and loved it at the same time. And, no matter how many sleepless nights a horror film gave us, we always went back for more.

So when a horror icon known for her sexy, sassy attitude decides she's going to take a shot at a series for younger viewers, it's news we say!

Brooke Lewis is following up her successful 2009 Ms. Vampy web series with a new inspirational series aimed at young girls. Titled Ms Vampy's Tween Tawk, Teen Talk & In Between Tawk, will discuss body image, self-esteem, peer pressure, caring about what others think of you, being popular, facing your fears, following your dreams, boys and Twilight.

All noble and important topics . . . except for Twilight. But that's just us.

This sounds like a great idea to me. And I like that Brooke is using this a precursor to a Halloween family film featuring Ms. Vampy called Vamp It Out. To get a taste of what it's all about, check out the extended preview below. To learn more about Ms Vampy, take a gander over here!

And don't forget to check out our feature interview with Brooke on our annual Halloween special, airing live on The X Oct. 28.