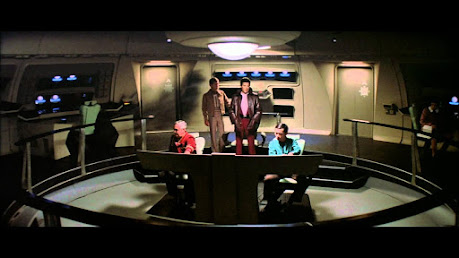 It's time to jump to warp speed again, as we continue our trek to the stars.  This week, we go seeking that which we lost...

Spock is dead.  McCoy is acting irrational.  Kirk is mourning.  A visit from Sarek puts Kirk on the path to bringing his friend back from the dead.

But the Genesis Effect inspires a Klingon Captain to take action... bringing them both to the brink of death of destruction...

1984's "Star Trek III: The Search for Spock" is the second of what I call "The Spock Trilogy".  This movie is a bit more subdued than "Wrath of Khan," though still much more actiony than "The Motion Picture".  It is a fascinating balance of action and drama that works quite well.  This movie has a nice flow to it that is smooth and transitions between the scenes and set pieces seamlessly.

The theme of loyalty and friendship are central to the development of the characters in "Search for Spock".  The actions of Kirk and crew ask us, "What would we be willing to do to protect and save those we love?"

I like how this movie explores the relationship between Spock and McCoy by making McCoy the vessel for Spock's katra.  It sheds light on how much they trust and respect each other- even though they tend to argue most of the time.

Of special note is Christopher Lloyd as Kruge.  I loved him in the role.  He brought a beautifully operatic tone to the character- which I think is quite appropriate for Klingons.  He chews the scenery like a master beside William Shatner.  Just a joy to watch.

While it's one of the slower paced movies in the franchise, it is still an enjoyable one- especially as part of "The Spock Trilogy".  I'm giving it a "Good".