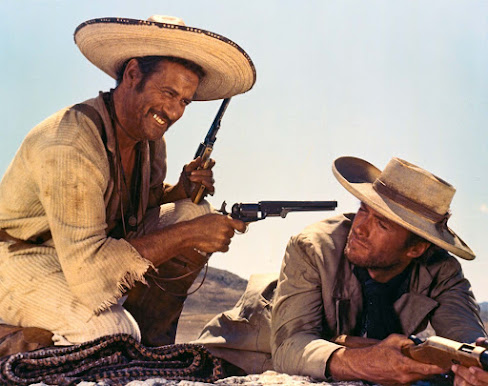 The sun sets upon this short series of reviews as we join The Man With No Name for one final adventure...

The country is torn in half by the American Civil War.  Brother fight and kill each other on the battlefield as the fate of a nation rides in the balance...

But three gunslingers are involved in a battle of a different sort: survival against the desert and each other as they hunt for treasure... and the final few dollars they may ever see...

Sergio Leone's "The Good, The Bad, and The Ugly" is the final movie in the "Dollars Trilogy"- and is by the far the most ambitious of the lot.  While "A Fistful of Dollars", and "For a Few Dollars More" used a fairly small cast, and few locations to tell their stories, this movie ups the number of performers, locations and includes a much more elaborate set piece by dropping the characters between the Union and the Confederacy armies, and by having them on a quest across the land.

Leone did a jaw dropping good job doing it too.  The story- as with the other movies isn't really all that involved, since it's only real purpose is to provide the characters space to enthrall us.  Once again, the movie is about the characters- Clint Eastwood's Man With No Name, Lee Van Cleef as Angel Eyes, and Elli Wallach as Tuco.  The characters are the story, and marvelous characters they are.

As I've noted, Eastwood's character isn't REALLY the main character, but rather a supporting character that provides a contrast and foil for Angel Eyes and Tuco.  In fact, if I were to name a "main character", it would have to be Tuco, as most of the movie- and character development, actually focuses on him.  He provides an amazing blend of humour, tension, and depth- aided by Wallach's superb acting.  His chemistry with Eastwood was a real joy to watch.

This movie showcases Sergio Leone's mastery of using wide shots and close-up to build tension to the breaking point, before releasing that energy in an explosive act of stylized violence and sound.  His sweeping scenery shots are almost art-like in their framing and composition.  He creates a marvelous atmosphere of grit, desolation, and hardness that adds to the sun scorched story.

And what can I say about the epic bridge set piece?  OMG!  Awesome- simply awesome.  Both from a effects standpoint, and a story standpoint, the whole story arc surrounding the bridge was amazing.  This movie was able to pack, drama, pathos, action, and humour into such a short part of the movie, while staying true to the style of the movie.  It built up the tension, then let it all burst forth in a display of fire, smoke, and thunder- a larger reflection of the smaller gunfights along the way.  There's a reason why this sequence is always referenced when talking about "The Good, The Bad, and The Ugly"!

I can't recommend this movie enough- though to fully appreciate it, you should absolutely watch it with the other two in the series.  It's a "Good" at high noon.

Starting 01 October, From the Basement will be conducting it's annual "Halloween Day by Day" event!  Every day in October, there will be horror themed reviews and articles.

Make sure to check back everyday to see what sort spooky tricks and treats the gang will be bringing you!