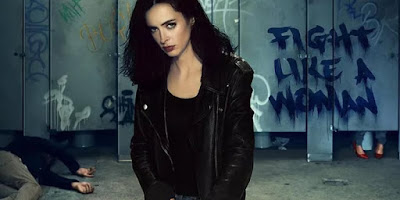 That's a mouthful, and I apologize.

Actually, I don't, as we don't apologize in The Basement.

But the truth is, the third and final season of Jessica Jones IS the last of the Marvel Netflix shows to stream, meaning that universe comes to a close when Jessica Jones drops all 13 episodes next Friday.

The series a tough slug for me, which doesn't mean I don't appreciate the fine work Krysten Ritter does as the lead character. I just find the show... boring. There. I said it.

But Jessica Jones does have its fans, which is why I'm sharing the trailer for this, the final season.