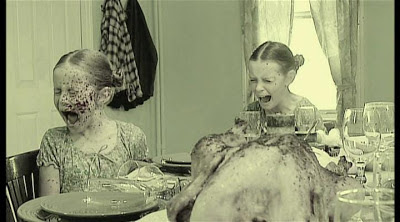 "Death on Demand" definitely wasn't one of those jewels.

Twenty years after a mountain climber is traumatized by an experience with a Yeti- culminating in his butchering his family during a nice dinner, a sleazy business man holds a contest in the now supposedly haunted house- a sort of scavenger hunt where the couples involved are looking for clues as to WHY the aforementioned mountain climber hacked his family to bits.  Unfortunately, they awaken his still insane spirit... and death ensues.

Up to the point where the blood starts to flow, you would swear that "Death on Demand" was filmed for the Family Channel.  It has that "feel" and look to it.  The camera work is very simplistic, and brightly lit... almost cartoony.  The acting is sit-comy, and the humour rather immature.  The characters were flat and overblown stereotypes.  It was hard to care about any of them- even the main character. Even the premise was dull and rather derivative of "Halloween: Resurrection"... which did the internet webcam broadcasting angle much better.

There WERE some kernels of potential in this movie: the gore, and the kills.  I was baffled by the contrast between the kills and the plot development scenes.  The kills were well shot and interesting compared to the rest of the film.

But unfortunately, since I didn't give a damn about the characters to begin with, the kills weren't enough to make this movie a satisfying experience.  I have to plop "Death on Demand" solidly into The Ugly.