An evil Elmo is on the loose in Puppet Killer 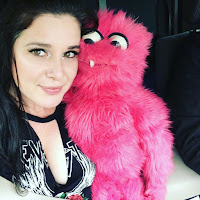 OK, it's not THE Elmo every child from the 90s adored, but the "loveable" Sesame Street character is the first thing I thought of when I watched the trailer for the upcoming horror flick Puppet Killer.

And hey, if you can't kill Elmo, you might as well have him whack a bunch of people in an indie horror movie!

Produced by former Basement guest and constant Scream Queen Jessica Cameron, Puppet Killer is about a group of six friends stalked by a killer who's obsessed with horror movie icons during Christmas vacation.


That killer may or may not be a puppet, but we're thinking it is. Don't believe us? Check out the trailer...

This has the potential to be a lot of fun, so we'll be keeping our eyes out for Puppet Killer when it hits the festival circuit next year. I'm also thinking it's time we have Jessica back on the show to talk about the countless projects she's working on . . .