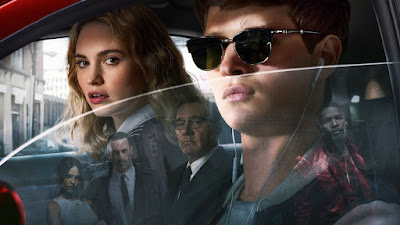 If you're anything like me, and treat every experience behind the wheel as a high-speed chase, you'd best not put your key in the ignition for a good 30 minutes after watching Baby Driver.

No, you're not going to want to drive into a cliff or anything. Not if you love good music and cinema. No. You see, not since Speed have I wanted to put the pedal to the metal so badly after seeing a movie.

Why? Because writer/director Edgar Wright's latest is such an adrenaline rush of pure moviegoing joy, featuring some of the best car chases ever put on film, that one can't help but want to race out of the parking lot, your favourite song blasting on the stereo.

Sure, the plot is nothing new. We've seen this movie before. But, much like Tarantino did with Reservoir Dogs and Pulp Fiction, Wright breathes new life into an old story with a solid cast and brilliant use of music and editing. And editing to music. And some cool dialogue to boot.

The first half of Baby Driver is better than the second, but the second half is still better than most movies I've seen lately. I was also pleasantly surprised by the amount of violence in Baby Driver. But, given Wright used a healthy dose of the red stuff in Shaun of the Dead and Hot Fuzz, I shouldn't have been.

This is the kind of movie I used to see two or three times in a theatre, before life got full. I'll definitely be seeing it again ASAP.