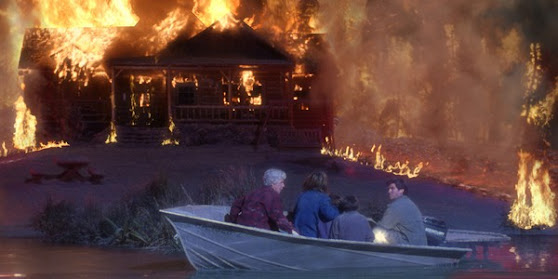 Shawn and I shake our heads at the general critical consensus for many genre movies, especially when the comments revolve around the film having great effects but lacking in story, character and originality. You know, because those who want to see a big-budget disaster movie are looking for those things! Sure, it can be a pleasant surprise when we get some originality and depth, but that's not what we're there to see.

When it comes to a disaster movie, we're paying to the see the disaster, not On Golden Pond. Fortunately, Dante's Peak delivers the disaster in spades, and holds up well almost a quarter of a century after its initial release.

The plot is standard stuff: Pierce Brosnan's volcanologist travels to Dante's Peak to investigate some strange seismic rumblings. He quickly becomes convinced a nearby volcano is ready to blow its top, but struggles to convince anyone else. So guess what happens?

If you've spent any time studying volcanoes -- my son's class is currently doing just that, which provided the inspiration to revisit Dante's Peak -- then you'll appreciate director Roger Donaldson and company tried to make the volcanic eruption of Dante's Peak as accurate as possible, and they pretty much succeeded. I'm sure there's BS floating in there but, for the most part, the action seems scientifically plausible. And stuff blows up good!

The people fair well too. Brosnan and Hamilton are decent, the kids don't get annoying, and the supporting players do what they're called upon to do as stock characters in a disaster movie.