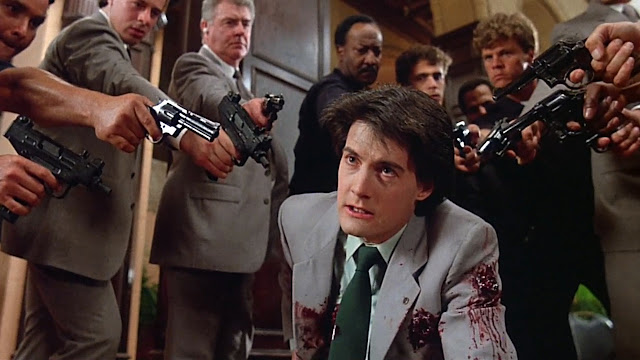 It's really through pure fate the Retro Review has been camped out in 1987 of late. It didn't seem like a particularly special year for movies at the time, but it has produced the recent series of reviews for this column.

Out of Scared Stiff, House II: The Second Story and today's flick, The Hidden, Jack Sholder's sci-fi/action movie is hands down the best. It's a fast-paced, action-packed thriller with more brains than you'd expect, and oodles of gunfire, goo, and heavy metal. Can't forget the heavy metal.

Sholder, who previously helmed A Nightmare on Elm Street 2, handles the material well. He opens the film with a brutal bank robbery and violent car chase through L.A., and doesn't really slow things down afterward. He and screenwriter Bob Hunt also inject enough humour and smarts to prevent all the carnage from getting out of hand.

It helps his cast, which includes a pre-Twin Peaks Kyle MacLachlan, Michael Nouri, and Babylon 5's Claudia Christian, is committed to the material, and has some fun with it without letting things get campy.

I'm convinced The Hidden was a commentary of sorts on the excess-obsessed culture of the 80s. Why else would the alien only be interested in robbing banks, stealing sports cars, listening to metal, and acting like a sociopath? Just something I wanted to leave you with...

So yeah, this one is Good, and a staple on my annual watch list.