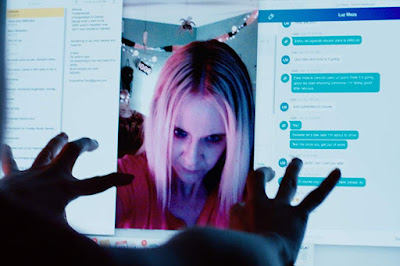 Watching a talented actor for the first time is a treat for movie fans. Seeing them excel in their first lead role -- in a feature film no less -- is a gift. Such is the case with Katherine Munroe in the upcoming Possession Diaries.

And here's a treat for Basement Dwellers everywhere: From The Basement not only reviews Katherine's first feature film, but has an exclusive interview with the star as well.

Jason and Katherine talk for 14 minutes about how she landed the role of Rebecca in Possession Diaries, what it was like working with veterans James Russo and Noel Gugliemi, and the pressures that come with starring in, what is essentially, a one-woman show. It's a great conversation, and hopefully we'll see a lot more of the star in the future.

Meanwhile, Jason and Shawn lament the death of Santa Clarita Diet, talk the Once Upon a Time in Hollywood, Terminator: Dark Fate and Star Trek: Picard trailers, and admit to being man children and cranky old men at the same time.

Throw in this morning's segment from the mighty Radio NL Morning News and you've got yourself a podcast for the ages. Or at least the weekend. So push play, enjoy, and stick with us!