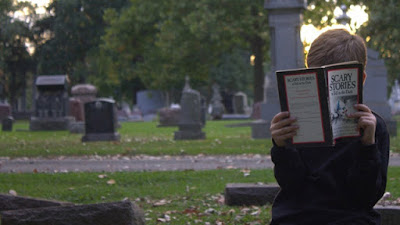 I wasn't the right age when Alvin Schwartz's Scary Stories to Tell in the Dark books came out amidst a sea of controversy, as many parent groups thought them too graphic and scary for school-age children.

Despite the fuss, and partly because of it I'm sure, the books have endured, and a big-screen adaptation is headed our way this summer from none other than Guillermo del Toro. This makes Cody Meirick's documentary about the books, Schwartz, and his inspirations a timely one.

Meirick has gathered scholars, artists, novelists, parents and members of the Schwartz family to tell the Scary Stories story. And he uses interviews, archived news footage, and some groovy animation to do it. This keeps the film interesting, if not a little disorganized at times. But hey, I have yet to make a documentary, so what do I know about structuring something like this?

While the book banning is of interest, especially considering it was completely ineffectual, it's the family stuff I found the most fascinating. This is as much a tale of a distant dad and his estranged son as it is about the books and their impact. Schwartz tried hard to be a good parent, but couldn't quite pull it off. And his son never really understood his father until it was too late (Schwartz died in 1992). It's poignant stuff.

Also of interest, at least to me, is the debate raised throughout the film about whether or not horror is appropriate for children. Some interviewees are downright against it, while others spoke to the need to not shelter our children from dark and scary things, saying it builds character and resilience. I'm in complete agreement with them.

I don't know if there's enough story behind Scary Stories to Tell in the Dark to sustain a feature length documentary. I was kinda done with it by the end. But again, I didn't grow up with the books. I'm giving it a Bad, but recommending it for fans of Schwartz and his work.